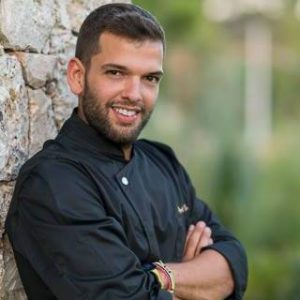 At an early age he understood his love for cooking and, for this reason, after he finished high school in 2005, he decided to turn his passion into a profession, starting his studies at the Le Monde Tourism School, in the field of cooking and pastry. His first professional contact with the catering operations was during his studies in June 2006.

The evolutionary path was about to start, in just 2 years he took over Sous Chef  in a well-known Athens restaurant. In the summer of 2011, Petros become the Executive Chef of a seaside restaurant in Spetses, and it was then when his business spirit led him to create, with his 2 friends, his own Catering on the island. Returning to Athens, he follows his vision of starting collaborations with restaurants, making menus and setting up restaurants  & all day bars from the beginning of their operation.

In the meantime he has worked in the most famous restaurants of Athens, satisfying the tastes of various prominent personalities. From May 2012 until now, Petros makes a major change in his career by taking the Private Chef’s way into the luxurious Yachts’ kitchen, making sure that he satisfies the palate of international personalities. TV shows and columns of well-known magazines and websites have hosted Petros Syrigo’s parts of work several times.  The demands of the field and his restless spirit have made him an unstoppable multitasker, who’s taking part in competitions and attending various seminars in Greece and abroad, such as French, Italian, Peruvian, Thai cuisine, and a specialized health food diet seminar.

Being a chef for the past ten years and having worked with a multitude of world tastes, Petros says that the Mediterranean cuisine is still his favourite, what inspires him the most. The chef maintains his own social media pages named “Petros Syrigos”.